Welle of Mercy was commissioned by the Dutch Gregorian Festival in 2010 and written for Schola Maastricht and the Lundi Bleu string orchestra.

Musically, Welle of Mercy largely speaks for itself but I want to amplify on two of the antiphons. The second part, Regina Caeli, could not have been composed without Blue Lines by Massive Attack. It is a tribute to the producer of that album, Jonathan Peter Sharp (Jonny Dollar) who died far too young. Bizarrely, we share our birth date.

In addition to the text of the Marian antiphon in the fourth part I have included a fragment of The Canterbury Tales written by Geoffrey Chaucer. One of his stories, The Prioress’s Tale, features a little boy who sings Alma Redemptoris Mater every day on his way home from school. During one of those homeward walks the boy is done in by a Non-Christian.

When his mother finds his lifeless body it miraculously starts to sing the Alma Redemptoris Mater. He tells that Mary appeared to him in a vision, put a grain on his tongue and that he will continue to sing until it is removed.

Welle of Mercy is dedicated to Johan de Meij and Dyan Machan.

Anthony Fiumara · Welle of Mercy, for mixed choir and strings 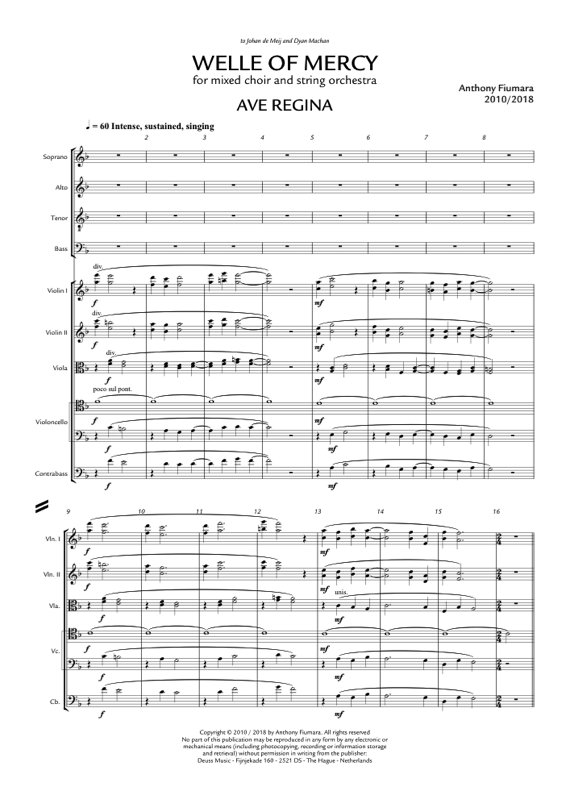 Commissioned by the Nederlands Gregoriaans Frestival.

Nederlands Gregoriaans Festival, May 29 2010 in Ravenstein, by Schola Maastricht and Lundi Bleu