To tell the truth, The Little Match Girl by Hans Christian Andersen is a gruesome tale. Each matchstick offers no more than the tinsel consolation of a heroin syringe, followed invariably disillusionment. And finally death.

Romain Bischoff, artistic director of Silbersee asked me to compose an introduction to The Little Match Girl Passion by David Lang — a solo for a girl who is about to cross the threshold of death. She has the small child's hope of a better life in eternity, which immediately reminded me of the fantasy heaven in the last part of Mahler's Fourth Symphony.

In Paradise has become a similar story: delirious and hopefull, a dying girl looks forward to the angels that will receive her in heaven. In Paradise became a sort of pop ballad: the voice is accompanied by an MP3 from a mobile phone. Like the way children listen to their music in real life.

For the text, I used a poem by Andersen, The Dying Child — a kind of Erlkönig, in which the chold, the dying in the arms of her mother hallucinates of the angels that will come to get her. I distilled the chorus from the Gregorian chant In Paradisum, from the Requiem Mass: it speaks of the angels leading you to paradise and that forever will sing for you. 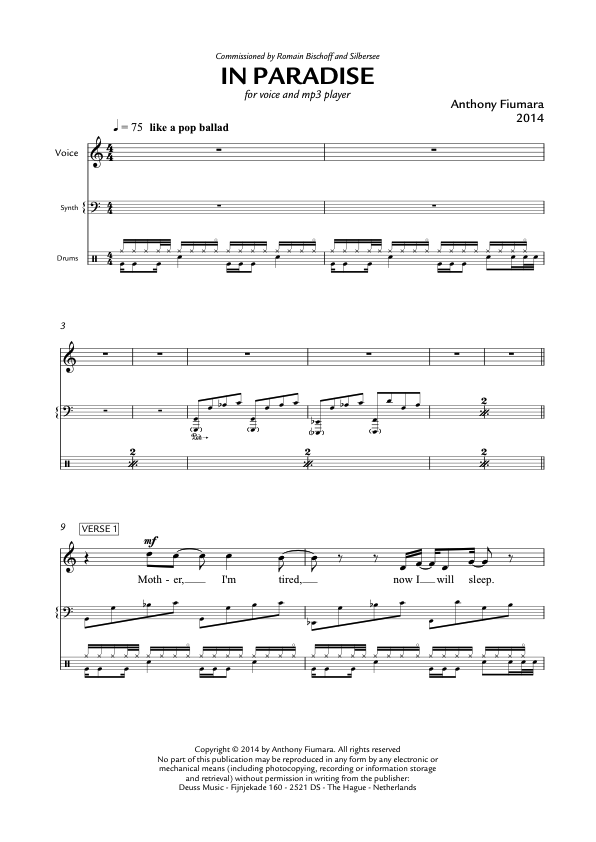 Commissioned by Romain Bischoff and Silbersee.

17 December 2014 in the Laurenskerk, Rotterdam, by Claudia Veltman.