"There was an intersection at Main and Hall, and there was nighttime activity that took place within that space… shoplights would come on, and I knew exactly what time they would do so. I also knew what time they would go off. Traffic signals would work — and they had a set time. Cars would go up and down, and they would always stay within the lines of the streets and crosswalks… I knew the taillights would be going in one direction and that the headlights would be in a line someplace else. So I had this universe — outside this place, and there were activities which happened within it, and light and energy. Then I had a space inside, within that room. A physical confine. It looked out into that space outside through the apertures I had made. Now, I could make openings to accept light in that space or to occlude it." (James Turrell, on the Mendota Hotel Stoppages)

In all of his works, the Light and Space artist James Turrell takes light itself and makes it his material. There is no object in his art, no image, and no point of focus. Aperture is a homage to James Turrell — not in light, but in sound slowly inhabiting the space. Aperture was written for the Dutch Radio Chamber Philharmonic Orchestra and conductor Thierry Fischer.

The work was commissioned by and dedicated to Kees Vlaardingerbroek, artistic director of the ZaterdagMatinee series. 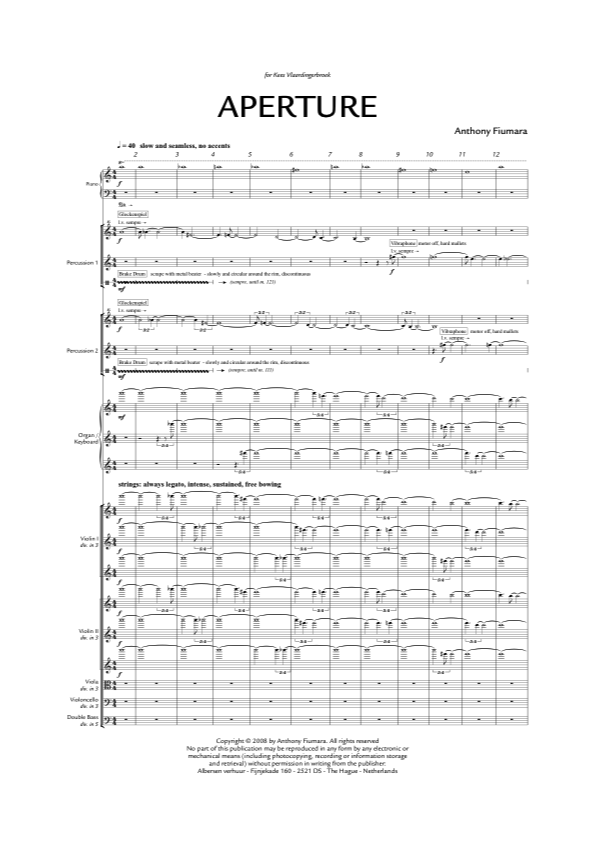 With Fiumara, the light shines blazing and extreme. Aperture is a piece without compromise, [...] it doesn't try to please the listener. Wagner’s 'unendliche Melodie' is translated here as 'unendliche Klang': a slowly thinning string sound from high to low, mixed with 'unheimische’ hits by two percussionists and a pianist. […] It seems as if nothing happens, but under the skin it tosses and turns. As if a bundle of light in an empty house searches mercilessly for the dark past of its earlier inhabitants.
Trouw
It breathes a serene atmosphere, is straightforward and process-based, and it intelligently uses well-tried canon techniques. [...] The work starts with a Ligeti-like sound image, as shrill strings descend gradually in different tempos. But in spite of a warm vibrato, Fiumara keeps the texture strikingly bare and without compromise. One hears the process, nothing more – except maybe in the slightly dramatized ending, where all the voices arrive at their lowest point.
NRC Handelsblad
Copyright © 2020 by Anthony Fiumara
Copyright © 2020 by Anthony Fiumara