The adjective ‘aerial’ for me stands for weightlessness, for lifting off, and for the unbroken view of the horizon.

When I went to Ralph van Raat with my initial ideals, he was happily surprised by the title. Did I know that flying was a hobby of his? No I didn’t. Van Raat actually took flying lessons in motorized planes and almost has his license. Since then he regularly sends me a photo of himself, grinning broadly, in a plane over Holland.

That evening, we talked a lot about music and what was on our minds: not only the (post) minimal music of Steve Reich and John Adams, but also about Iannis Xenakis, jazz and pop. I played him the track O Superman by Laurie Anderson and he played me Keith Jarrett and Chick Corea on electric piano. We jumped from one topic to the other, all the while listening to music from a wide genre-broadband.

The electric pianos ended up in the first part of the concerto. In the prelude-like part with the same title as the concerto, Ralph imitates a delay on the acoustic grand. In electric music, a delay is an echo machine that takes every attack and repeats it rhythmically. The orchestra in the opening part is actually the reverb of the piano. In the background, harp and celesta play a continuous little motive, like a strummed guitar in the distance.

I couldn’t have written the second part (Here Come the Planes) without Laurie Anderson’s eighties song O Superman. It became a kind of simple music – a melody over a chaconne in the low instruments. A chaconne is a repeated bass line above which the melody slowly develops.

The final part (R & R, which is in part a play on Ralph’s initials) is the fastest. The piano starts and is heard alone for the first time. It doesn’t take long, however, before it is joined by the steadily strengthening orchestra. In this part, it is as if the sound of the plane slowly comes into focus only to disappear from sight in the final bars.

Aerial is not a ‘concerto,’ in the sense that the piano and orchestra should face each other in competition (as in the original meaning of the word ‘concertare’). It is more like that they amplify and complete one another, in a sonorous overall sound. I like that. 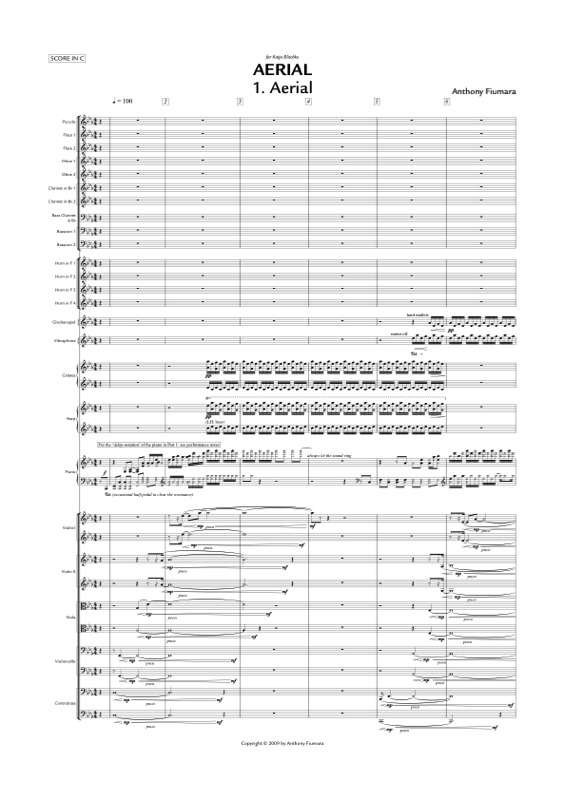 Hypnotic as the piano produced a predominantly rhythmical upward theme that was permanently present, with some slight variations. [...] The piece definitively has an identity of its own.
Friesch Dagblad
The composition could best be described as classical lounge music, with a billowing surf and repeating motifs without time signature, like a stadium wave.
Leeuwarder Courant
A sense of unfettered freedom with a view of the ethereal horizon. That is what the audience took away from listening to Aerial, a new work by Anthony Fiumara. [...] Sometimes the orchestra floated soberly under Van Raat's wings while at other times the engines were audibly powering up. Yet there was something peaceful and extraordinary tuneful about the colourful harmonies that were launched unwaveringly on harp and celesta.
Dagblad van het Noorden
Copyright © 2020 by Anthony Fiumara
Copyright © 2020 by Anthony Fiumara